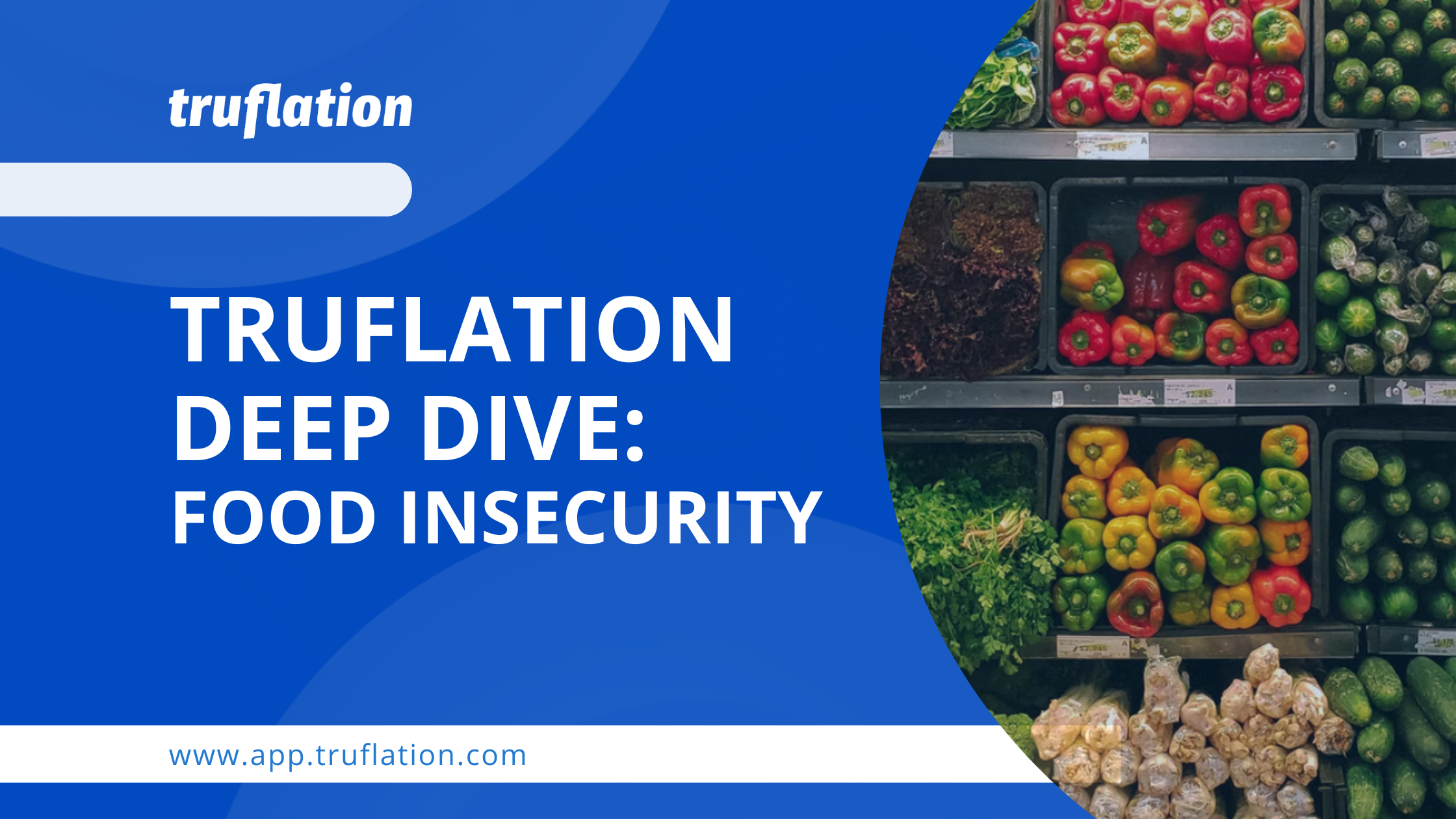 Food prices have been one of the most prominent and persuasive drivers of global inflation this year. In 2021, Truflation began building global inflation data by launching our US and UK indexes. Today, we are deep diving into the data behind food production, supply, and agricultural commodity markets to what lies behind the ‘prices’ and how this affects everyone globally, no matter where you live. We will cover:

Let’s look at the stories behind the data and how various events over the past two years have combined to create not only high food prices but also global food insecurity. What, if anything, can be done as we look to this year’s harvest and this coming winter?

Over the last two decades, the planet’s grain production has been steadily rising. Better agricultural expertise, cheaper fertilizers, and inputs have increased global yields consistently since 2000. However, during 2006-2007 and 2010-2011, we saw high wheat price shocks triggering riots in Egypt and the Middle East due to food shortages in these net food importing countries. Impacts like these examples cause significant problems for low-income families who spend upwards of 50% of their income on food in many developing countries. Luckily, these were both exceptional events in the last two decades, but they illustrate the effects of price instability.

World grain production was on track to continue its upward trend of increasing yields this decade. Then amid the COVID pandemic, we lived through 2020 with lockdowns, food shortages, and supply chain disruptions that are still influencing global food prices and production. COVID created labor shortages for agricultural sectors in many countries due to limits on people’s mobility and lockdowns, particularly those products characterized by peak seasonal labor demand and labor-intensive production. Many countries had also dipped into their grain reserves amid uncertainty about the availability of supplies.

In many countries, labor-intensive seasonal jobs are performed by immigrants from other countries, especially in the US and Europe. With the arrival of the pandemic, these sources of labor were no longer plentiful, putting pressure on wages as industries competed for workers. Also, many immigrants ‘went home’ during COVID due to the lack of jobs. The forced closure of businesses also affected them as most were not eligible for financial assistance or COVID support in western countries where they worked and lived. Consumers also changed how they consumed food (at home, not at restaurants or work), and food supply chains had to adjust quickly.

Food processing plants and production facilities often closed down or significantly reduced their output. This created the supply shocks we saw in the US, for example, in meat packing plants, baby formula production, and many others. Labor shortages in agriculture and transport are still affecting food production and supply chains today in the US and Europe due to the lack of seasonal migrant labor and heavy goods vehicle drivers. These labor shortages and supply chain disruptions were the story behind the food supply chain issues we saw from mid-2020 onwards.

The era of climate change

Global food markets are extremely concentrated, both in terms of supplies and reserves. Wheat is the second-most-produced cereal grain behind maize, and the international trade in wheat is greater than all other crops (even rice!). Seven countries make up 86% of wheat exports, while three hold 68% of the world’s wheat reserves. The figures are similar when it comes to coarse grains, corn, rice, and soybean.

Fun facts about wheat producers that will be important later on:

2019 was a typical year for global harvests. This changed during the pandemic as production and yields were affected by extreme weather events in Europe and North America in 2020 and 2021.

The US data speaks for itself:

For example, in the US, in 2021, durum wheat production was down 46% from 2020 due to drought conditions in wheat-growing states and extreme cold weather (from the February polar vortex in North America), reducing spring wheat crop yields by 44% from 2020.

Here is the Europe Union’s wheat production over the last decade with this year’s forecasted production/yield:

Adding in global trade seizing up and shipping disruptions after COVID, these ‘lower’ harvests pushed global wheat prices even higher.

In 2021, food supply chain distortions were starting to reduce, and commodity export bans had reduced from their peak during COVID as countries protected their markets using export bans of essential food commodities. The table to the right illustrates the number of countries with active export bans in 2021 and the percentage of world calorie markets involved. As you can see, only two countries have actual bans, and these only affect two products. Source: FoodSecurityPortal.org

By 2022, the latest data from the International Food Policy Research Institute’s food trade policy tracker show that, since the Ukraine invasion, 23 countries have imposed export restrictions on food. The current limits affect about 17.3% of total calories traded globally, up from 5.6% before the war.

2022 is a whole other level of export restrictions.

Russia’s invasion of Ukraine was the straw that broke the camel’s back in 2022. Even before the invasion, the World Food Programme had warned that 2022 would be a terrible year for food production. The high cost of stable foods has already raised the number of people who cannot be sure of getting adequate nutrition to 440m. Nearly 250m are on the brink of famine.

Russia and Ukraine supply 28% of globally traded wheat, 29% of barley, 15% of maize, and 75% of sunflower oil. Ukraine’s food exports in an average year provide the calories to feed 400m people! Russia is also the world’s largest global exporter of fertilizer. Despite high grain prices, farmers in the rest of the world may be unable to make up for this year’s shortfalls, given that China’s wheat crop may be its worst ever (after rains delayed planting in 2021) and India’s extreme temperatures this year.
In addition to food commodity export bans in 2022, there are also export bans on the global fertilizer trade. Although Russian sanctions are targeted, these have greatly impacted countries' ability to source fertilizers for agricultural use. The table below illustrates the fertilizer export bans currently in effect:

Both Russia and China have export licensing restrictions in place until the end of this year. Countries as far away as South America, Asia and China are net importers of Russian fertilizer. The war in Ukraine has upended this supply of fertilizer and raised fertilizer prices globally as countries search for alternative supplies to ensure their crop production for the coming year.

If all of this wasn't enough to throw the equilibrium between supply and demand completely out of whack, Russian sanctions and the resulting energy supply shock have disproportionately affected food production. Firstly, despite soaring prices, profit margins for farmers globally are shrinking because of the surging cost of fertilizers AND energy. Both of these markets in fertilizer and energy are disrupted by sanctions and the scramble for natural gas.

The energy component of agriculture is further squeezing margins and increasing prices for everyone. You need natural gas to manufacture fertilizer as well as using electricity/fuel to be able to transport it (liquefy it, ship it via cargo ships and gas pipelines). If there are cutbacks on fertilizer use, global yields will be lower at precisely the wrong time for farmers.

Secondly, this war of attrition will inevitably lead to reduced 2022 harvests in both countries. Thirty-six countries, including some of the world's most vulnerable and impoverished, relied on them for more than half of their wheat imports. Food insecurity is not always related to availability; it’s a question of accessibility and affordability. The recent grain export agreement is a glimmer of hope in an otherwise bleak picture for food availability in the coming years. Will Ukraine resuming grain shipments reduce global food prices? No one knows.

The more important question is will Ukraine have the labor and fuel to plant their next crop this autumn even if they manage to harvest and store it this year? For Russia, sanctions may affect their ability to get seeds and pesticides they need from the European Union for next year’s crop. Either way, the overall global production, and yields will be reduced for the next two years due to the disruption of the ongoing war and its consequences.

Commodity futures are coming down in food and energy, reflecting future pricing reductions in demand. However, in 36 countries, food inflation is 15% or higher. Sixty percent of low-income countries are at an increased risk of debt default, especially with the strengthening dollar, which makes it much harder for these countries to service their debts.

So far in 2022, we have extreme heatwaves across Europe and North America, which have resulted in drought conditions. These droughts will reduce grain yields in the European Union, Canada, and the US this year. There is competition for fertilizers for spring planting in the Southern Hemisphere (South America, Australia & Africa) and restrictions on fertilizer exports, some of which do not expire until the end of this year, affecting autumn planting in the Northern Hemisphere as well. When adding in the effect of Russian sanctions and the resulting spike in energy prices, it is easy to see what is driving food price inflation and why people are so worried about food insecurity globally as we move towards 2023.

The UN World Food Program estimates that due to ongoing conflicts (Afghanistan, Yemen, Ethiopia) and climate shocks (extreme droughts in the Sahel and the Horn of Africa), the number of people at risk of starvation jumped from 80mn to 135mn before COVID. COVID resulted in that number jumping to 286mn people. The World Food Program alone bought 50 percent of its grain from Ukraine before the war.

The WFP’s forecasted budget deficit this year alone will reach $71million a month (that equates to a budget deficit of $850mn by the end of this year alone). This budget is to feed the same number of people they ‘fed’ last year (kept alive at subsistence level). However, the number of people that need help from the World Food Programme has doubled.

Like Ethiopia in the 1980s, famine is a real possibility over the year ahead if food prices remain high and availability remains constrained. Food insecurity matters to everyone because famines cause conflicts, political unrest (as seen in Sri Lanka), and mass migration. The most significant displacement of people and causes of food insecurity is climate change-related this decade.

So what can be done? Below are a few recommendations from Dr Arif Husain, the Chief Economist at the U.N. World Food Programme:

Winter is coming and governments might need to work together to tackle this food crisis in the making.

Sustainable economic growth can only come from a common understanding of the facts used as a basis for decision-making. To meet this need, Truflation built a first-of-its-kind infrastructure to provide unbiased financial data on a secure blockchain to enable faster, more intelligent decision-making.

Truflation is based on real market price data collected from more than 30 different data sources daily to deliver crucial business intelligence around inflation.  We provide daily, unbiased, data-driven, real-market inflation indices and other economic metrics to financial products and applications through the Chainlink oracle network via a free public dashboard and APIs.